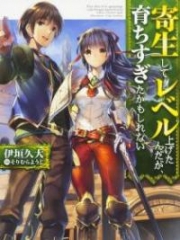 I LEVELED UP FROM BEING A PARASITE, BUT I MAY HAVE GROWN TOO MUCH ALTERNATIVE : 寄生してレベル上げたんだが、育ちすぎたかもしれない

Caught up in a ritual performed by a G.o.d in another world, Eiji Choukai is transported to another world. The otherworldy G.o.d responsible for the ritual looked at Eiji potential incarnations, they pulled out Cla.s.ses like those from “I reincarnated into a vending machine”, but whereas there are normally several tens of Cla.s.ses available for a person, the only Cla.s.s avaiable for Eiji was “Parasite”.
Having no choice but that one set-in-stone Cla.s.s, Eiji reincarnates into his new world despondent. However, after using his powers he suddenly realized its potential. Using the parasite’s powers, he finds he can amplify himself countless times by obtaining other people’s powers. it could be that Eiji’s level might rise too much.

The Golden Eyes Of The Wolf

If I Have You, What More Could I Ask For In This Life? Alternative : 医生，一生何求; 如若有你一生何求