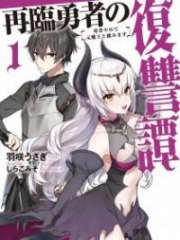 Amatsuki Iori was a high school student summoned to a parallel world and started fighting as a Hero to save the country.
As he was trying to save the world, he is killed by his trusted companions.
Just when Iori had thought that he had died, he opens his eyes and discovers that he had been summoned again, but this time it was into the future as a Hero to subjugate the demon king that he himself had failed to defeat before.
Then he realizes that deep inside him when he was once the Hero commanding and leading battle, there surfaces in his mind the figure of his companions.
[……I will make them regret betraying me]
There appeared before Iori who had been driven by hatred a former demon king girl who wished for a similar revenge.
On his second coming as a Hero in this world he throws away his ideals, together with the former demon king he pushes forward for the sake of his revenge.